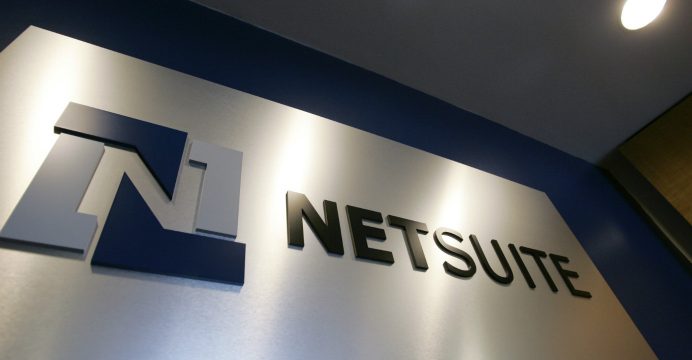 “Oracle and NetSuite cloud applications are complementary, and will coexist in the marketplace forever,” said Mark Hurd, chief executive, Oracle. “We intend to invest heavily in both products — engineering and distribution.”

“NetSuite will benefit from Oracle’s global scale and reach to accelerate the availability of our cloud solutions in more industries and more countries,” said Zach Nelson, chief executive, NetSuite.

“It’s definitely pricey from Oracle’s perspective, but it’s understandable and it’s justifiable especially in this environment,” said Morningstar analyst Rodney Nelson, who noted some companies in the sector have sold for high multiples.

The transaction must clear regulatory hurdles and win support from a majority of NetSuite’s outstanding shares not owned by NetSuite officers or by persons affiliated with Ellison, the companies said. Shares of NetSuite surged 18.2 percent to $108.25 in pre-market trade, while Oracle advanced 1.3 percent to $41.50.

According to Reuters, Oracle and NetSuite both offer software applications that help companies automate back-end and administrative operations from technology to human resources.

NetSuite’s chief executive, Zach Nelson, was responsible for Oracle’s global marketing from 1996 to 1998. Oracle’s cloud business, which stores enterprise software and data on remote servers, lets the company sell to clients who lack the budget for on-site hardware and technology staff.

The deal also could help Oracle, which is aggressively trying to build and sell more cloud-based business software, play catch up with competitors such as Workday Inc and Salesforce.com Inc that specialize in cloud-based offerings. NetSuite on Thursday reported strong second-quarter results, with revenue up 30 percent on the year and adjusted net income that beat estimates.

Jefferies analysts said in a note the deal provides an immediate, significant entry into the mid-market for corporate applications but that “the price paid seems steep.”

Oracle also has acquired companies such as Textura and Opower to increase its competitiveness in the cloud market. Morningstar’s Nelson said NetSuite would be Oracle’s largest purchase since PeopleSoft more than a decade ago. The company expects the deal to add to its adjusted earnings in the first full fiscal year after it closes.