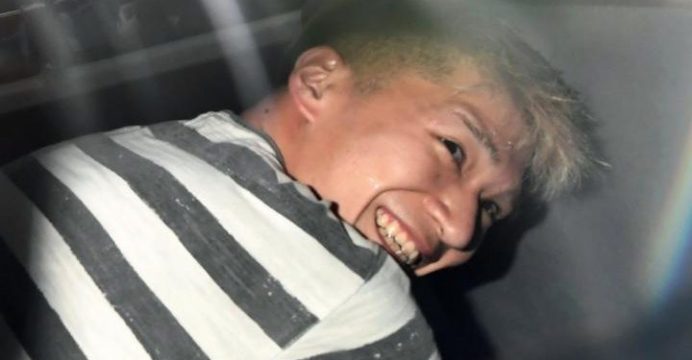 A Japanese man who admitted to murdering 19 people at a centre for the mentally disabled grinned to news cameras on Wednesday before being questioned over the country’s worst killing spree in decades, reports BSS.

The 26-year-old reportedly said he wanted all disabled people to “disappear” after the knife rampage that left his victims in pools of blood, including some who were stabbed in the neck.

With a blue jacket draped over his head, Satoshi Uematsu was escorted out of a police station into a waiting van before a crowd of flashing news cameras.  Inside the vehicle with the jacket removed, he smiled broadly in footage broadcast on morning news shows.

An official at the Tsukui police station where Uematsu was held after the attack declined to comment on the investigation, only confirming that he was being transported to prosecutors for questioning.

Uematsu is accused of breaking into the Tsukui Yamayuri-en care centre in the forested hills of Sagamihara city, outside of Tokyo, in the early hours of Tuesday.

He reportedly tied up two caregivers before stabbing residents, leaving a total of 26 people injured, 13 of them severely.

He quickly turned himself in at a police station, carrying bloodied knives and admitting to officers: “I did it”.

He reportedly also said: “The disabled should all disappear.”

Security camera footage taken near the centre showed a vehicle arriving there shortly before the attack began. The driver opened the boot to remove objects, before walking toward the facility.

At around 2:50 am, shortly after an emergency call was made to police from the centre, the footage shows the driver dashing back to the vehicle, carrying a large bag in his right hand.

– ‘Appalling’ – Uematsu left his job at the care home and was forcibly hospitalised in February after telling colleagues he intended to kill disabled people at the centre.

But he was discharged 12 days later when a doctor deemed he was not a threat. He had previously delivered a letter to the speaker of the lower house of parliament in which he threatened to kill hundreds of disabled people, outlining a broad plan for night-time attacks against Tsukui Yamayuri-en and another facility.

In the rambling letter he presented a vision of a society in which the seriously handicapped could be euthanised with the approval of family members since “handicapped people only create unhappiness”.

The top-selling Yomiuri Shimbun daily called the case “appalling”, and urged a probe of the decision to release Uematsu from medical care.

“It is a matter of great regret for society to let such a serious stabbing incident happen,” it said in an editorial which called for increased security at care facilities.

Japan has one of the lowest rates of violent crime in the developed world and this week’s killing spree is believed to be the nation’s worst since 1938, when a man armed with an axe, sword and rifle went on a rampage that left 30 people dead.