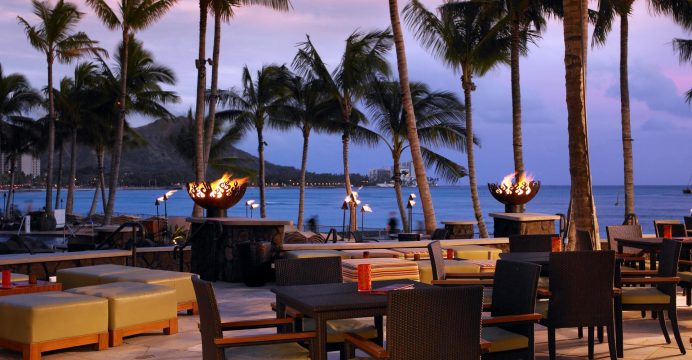 “Known for its first mover advantage, Sheraton is once again leading the way in making an extraordinary destination like Samoa more accessible.” said Sean Hunt, Regional Vice President, Pacific, Starwood Hotels & Resorts. “The addition of Sheraton Samoa Aggie Grey’s Hotel & Bungalows is a natural step following the successful opening of our first Sheraton resort on the island last year. We are honoured to be working alongside the Grey family, an established owner and esteemed family, and to be a part of the next chapter of this much-loved hotel.” Among the Jungle and Waterfalls

Founded by Aggie Grey in 1933, the original hotel was established as a high profile club and gathering place for American servicemen stationed in Samoa during WWII. Having completed a comprehensive top to bottom refresh, the property’s new design combines its colonial heritage and classic charm with contemporary updates and features to appeal to today’s modern traveller. All 175 guest rooms, bungalows and suites are spacious and styled to complement the idyllic South Pacific setting, with contrasting dark wood furnishings against neutral tones. Accommodations offer the Sheraton brand’s signature amenities and services, including a premium sleep experience, and guests staying in the hotel’s Club Rooms can enjoy upgraded in-room amenities and special access to the Sheraton Club Lounge.

The hotel’s robust renovation features new, luxurious on-site facilities, including a swimming pool and lap pool, Sheraton fitness centre, Manaia Polynesian Spa, offering local and signature treatments, and 916 square metres of flexible meeting and conference space. Sheraton Samoa Aggie Grey’s Hotel & Bungalows also offers diverse dining options, such as Aggie Grey’s by Peter Kuruvita, combining flavours from across the world with an array of fresh produce available in Samoa. The Sheraton brand’s signature restaurant is located by the pool and offers all-day dinning with an indulgent spread of international fare, including buffet and a la carteoptions. At the Lobby Bar, guests can enjoy a mix of artisanal small plates and eclectic bar snacks, served alongside suggested premium wines and selected craft beers from the Sheraton brand’s new Paired menu. For casual dining, The Tea Lounge offers coffee, light snacks and fresh-baked treats from the gourmet deli.

Forming part of Polynesia, Samoa is an island nation nestled in the South Pacific, a five hour flight from the east coast of Australia. Renowned for its natural beauty, including jungles, waterfalls and lava fields, Samoa is an exotic paradise that offers rich cultural heritage as well. Located in the Samoan capital of Apia on Main Beach Road, just a 30-minute drive from Faleolo International Airport, Sheraton Samoa Aggie Grey’s Hotel & Bungalows overlooks a stunning harbour on the edge of the Pacific Ocean. The hotel is centrally located with many local attractions and activities nearby including the Palolo Deep Marine Reserve, which is regarded as one of the most beautiful underwater spots in Samoa. The commercial areas of Apia are also within easy access for guests, making it an ideal choice for business, leisure or both.

“Starwood’s footprint in the Pacific continues to expand, and the Pacific region remains a key growth market and opportunity for us,” continued Hunt. “Sheraton Samoa Aggie Grey’s Hotel & Bungalows is an important addition for the Sheraton brand, underscoring its aggressive expansion plans as part of Sheraton 2020 – the comprehensive 10-point plan designed to put Sheraton Hotels & Resorts back in the global spotlight.”