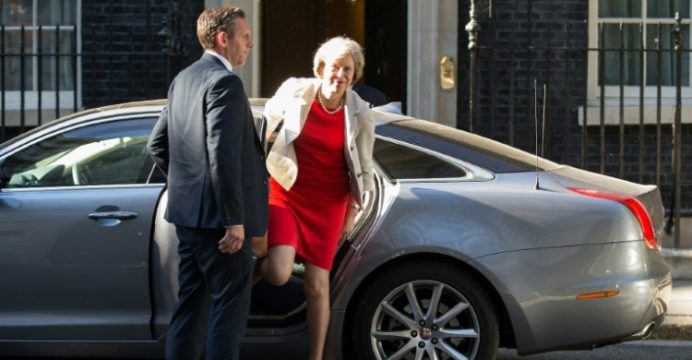 British Prime Minister Theresa May is heading to Berlin on Wednesday and Paris on Thursday to start thrashing out the roadmap for Britain’s departure from the EU, reports BSS.

In her first foreign visits, a week since taking over as Britain’s premier, May will plunge straight into laying out the Brexit groundwork in talks with German Chancellor Angela Merkel and French President Francois Hollande.

May’s Downing Street office said she would try to establish a personal relationship and explain how her government needed time to consult before sculpting its objectives for Britain’s divorce from Brussels.

May to thrash out Brexit roadmap in Berlin, Paris talks

“I am determined that Britain will make a success of leaving the European Union and that’s why I have decided to visit Berlin and Paris so soon after taking office,” May said in a statement.

“I do not underestimate the challenge of negotiating our exit from the EU and I firmly believe that being able to talk frankly and openly about the issues we face will be an important part of a successful negotiation.

“I also want to deliver a very clear message about the importance we attach to our bilateral relationship with our European partners, not just now but also when we have left the EU.”

May will have a meeting and a working dinner with Merkel. Then on Thursday, she will visit Paris for a meeting with Hollande at the president’s official residence, the Elysee Palace.

Key sticking points in the Brexit negotiations could be freedom of movement and the timetable for triggering Article 50 of the Lisbon Treaty, which starts the two-year countdown to Britain’s formal departure.

“May has to build bridges with her fellow leaders,” Professor Iain Begg, from the European Institute at the London School of Economics university, told reporters.

“It will be getting to know each other combined with trying to put positions on the table.

“May has this reputation as a tough negotiator who says what she wants and wants what she says. She will be anxious to convey that she’s not a soft touch.”

The new British prime minster may well have an easier ride with Merkel than Socialist Hollande, though both have their own domestic election cycles to think about.

Commentators have drawn comparisons between the two female centre-right leaders: both pastor’s daughters with low-profile husbands, no children and a love of Alpine hiking who have risen to the top.

While some EU countries want Britain out of the bloc as soon as possible, Merkel has called for patience with London as it sorts out its Brexit negotiating stance.

However, she has also warned that Britain cannot have continued access to the single market while restricting the freedom of EU citizens to emigrate to Britain — the key issue in the June 23 referendum.

Meanwhile, Hollande has a presidential election looming in April and is coming under pressure from the Front National, which wants France to leave the EU too.

“For Hollande there is manifestly a concern about Brexit contagion to France,” said Begg.

“He will want to impress upon May that she cannot string this along indefinitely or expect great gifts from France because Hollande has domestic politics to think about and he will want to avoid ‘encourager les autres’ (encouraging others).”

Downing Street said it would “take some time” to prepare for the Brexit negotiations, as the government needed to consult with the devolved administrations in Scotland, Wales and Northern Ireland, and with industry sectors to determine the objectives for post-departure relations with the EU.

Nina Schick, communications director at the Open Europe independent EU policy think-tank, said Britain “does have things in its favour” going into the talks.

“Paris and Berlin are quite divided as to what the future of the EU should be,” she told reporters.

“I don’t think May has the upper hand. She’s the one that’s going to trigger Article 50. There will be a period where Merkel will say there’s no need to rush into it.

“But if the UK does not trigger it until late next year, political goodwill might be lost if the UK waits too long, especially if uncertainty drags on.

“It’s a fine balancing act that May’s got to achieve.”