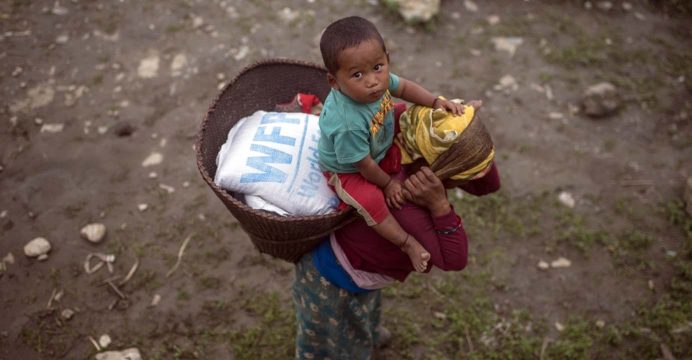 The United Nations World Food Programme (WFP) has welcomed a contribution of US$2 million from the Korea International Cooperation Agency (KOICA) – half of a multiyear contribution to the Saemaul Zero Hunger Communities Project in Nepal.

The funds will allow WFP to continue its work reducing poverty and food insecurity in the Far-Western region of Nepal into 2017.

“I am delighted that KOICA remains committed to working with WFP in rural Nepal,” said Pippa Bradford, WFP Representative and Country Director. “This generous and timely contribution will help the people of the Far-Western region build more sustainable livelihoods.”

The Saemaul Zero Hunger project was launched in 2012 within two Village Development Committees: Ladagada and Pokhari in Doti District. Over the following three years, the livelihoods of the 1,772 families in these communities improved significantly.

Households contributed their labour and skills to the construction of community assets, including small irrigation canals and ponds which helped irrigate 217 hectares of agricultural land. Fifty-one km of rural roads were constructed or rehabilitated, two new community centres were built and 159 water tap stands installed. Participants received a total of US$810,500 for their labour.

The project aims to build sustainable infrastructure and support resilience in vulnerable rural communities which have had limited access to food and basic services. These goals are achieved through such activities as building small rural and agriculture assets, promoting different types of livelihoods and improving community capacity.

Work in the next phase will follow two models: Korea’s ‘Saemau Undong’ plan, a community-based integrated rural development initiative of the Republic of Korea; and WFP’s cash for assets programme that pays for work to create assets such as roads, irrigation systems, and other facilities used by the community.

“The Korean Government is very glad to continue and scale up the support for the most vulnerable communities in the far west of Nepal,” said Mr. Hyungkyoo Kim, Country Director of KOICA Nepal Office.

“We are committed to assisting the population in Doti for building more sustainable and resilient communities and we strongly believe that the two organizations’ combined modalities and delivery mechanisms will assist populations in dire need.”

The project is funded by the Republic of Korea through the development agency KOICA and implemented by WFP with the Government of Nepal closely involved to ensure alignment with its development priorities. WFP’s implementing partner is Good Neighbours International, working with its local partner, Asal Chhimeki Nepal.