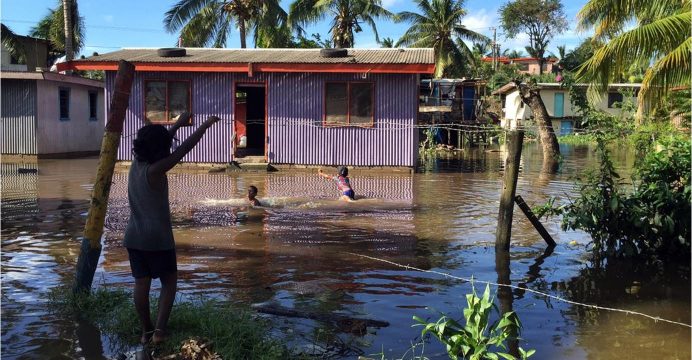 The Government of Fiji today signed a US$50 million loan agreement with the World Bank to support their continued recovery needs from Tropical Cyclone Winston and enhance the country’s efforts to protect the most vulnerable.

A further US$50 million loan was also signed in the same ceremony with the Asian Development Bank (ADB), bringing the total amount to US$100 million.

Aiyaz Sayed-Khaiyum, Fijian Attorney-General and Minister for Finance, met with Mona Sur, World Bank Acting Country Director for Papua New Guinea, Timor-Leste and the Pacific Islands and Robert Jauncey, Asian Development Bank Regional Director for the Pacific, in his office this morning for the ceremony.

Category 5 Cyclone Winston was the strongest cyclone ever recorded in the Southern Hemisphere, killing 44 people and leaving a trail of destruction across large parts of Fiji. The total damage and losses resulting from Cyclone Winston are estimated at US$1.38 billion (31 percent of GDP), including US$959 million in damage and losses to Fiji’s productive, social and infrastructure sectors. Nearly 130,000 homes were damaged or destroyed, affecting approximately 15 percent of Fiji’s total population.

The loan was approved by the World Bank’s Board of Executive Directors on Thursday 30 June in Washington D.C.