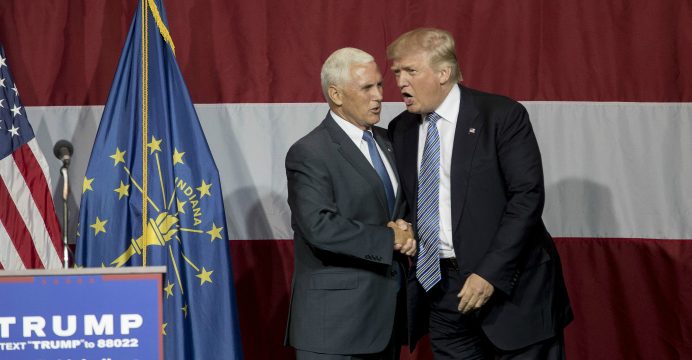 Mike Pence selected as the running mate of Donald Trump

Republican Donald Trump has selected Indiana Governor Mike Pence to be his vice-presidential running mate. Mr Trump’s campaign planned to announce his selection on Friday, but cancelled the event because of the attack in Nice, France, reports BBC.

On Friday, Mr Trump confirmed the selection on Twitter. Mr Trump hopes Mr Pence – a former congressman popular among social conservatives – can help him shore up support among wavering Republicans.

“My family and I couldn’t be more honoured to have the opportunity to run with and serve with the next president of the United States,” Mr Pence told reporters in New York on Friday.

Mr. Pence is the governor of Indiana state

Other candidates in the running were former House Speaker Newt Gingrich and New Jersey Governor Chris Christie. According to CNN, Pence took to Twitter shortly after the announcement, saying, “Honored to join @realDonaldTrump and work to make America great again,” and the campaign debut a new logo featuring both names.

Pence’s lawyer filed paperwork with the Indiana secretary of state office officially removing him from the governor’s race Friday morning.

The Saturday event is currently scheduled to take place in New York Hilton Midtown in Manhattan, the campaign announced, after earlier plans to hold the event in New Jersey. Trump did his best to keep the drama going Thursday after a frenetic day.

But speaking at a fundraiser in Los Angeles later in the evening, Trump said he had made his pick and the campaign was “ready to announce,” according to an attendee. Trump, however, did not say whom he had chosen.

On Wednesday, Trump held a series of auditions with Pence and other top contenders including Christie and Gingrich. And on Thursday, despite sources indicating to CNN that Trump was strongly leaning toward Pence, others in his inner circle — including Trump’s son, Donald Jr. — repeatedly urged caution. But by early evening, Trump made the offer.

Before his current job, Mr Pence, 57, spent 12 years in Washington in the House of Representatives. His legislative experience and position of governor of a Midwestern state could give Mr Trump advantages in the general election.

The Indiana governor is strongly anti-abortion and signed a religious freedom bill, which some saw as anti-gay, into law.

He has also expressed support for free trade agreements and was in favour of the war in Iraq, which Mr Trump says he was not.

Mr Pence also criticised Mr Trump for his attacks on Hispanic judge Gonzalo Curiel, who was born in Indiana. Mr Trump had said Mr Curiel could not possibly rule fairly in a case against him became of his Hispanic heritage.