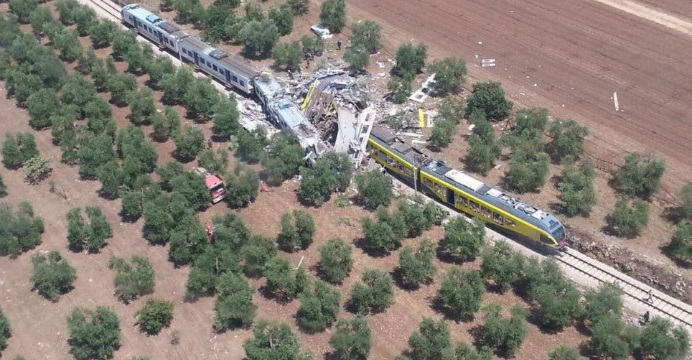 Ten people were killed in a head-on collision between two trains in the southern Italian region of Puglia on Tuesday, firefighters said, reports BSS.

Footage showed emergency services racing to extract people from the wreckage of two smashed carriages thrown across a single track near the town of Andria, near Bari. The chief of the firefighting service in Bari said 10 people had been killed and dozens injured.

“Some of the carriages are utterly crumpled and the rescue services are pulling people out, many are wounded,” Riccardo Zingaro, head of traffic police in Andria, told journalists from the scene.

Prime Minister Matteo Renzi interrupted a speech in Milan to say the country would “not stop until we know what happened”.

“This is a moment for tears in which we need to work to recover the victims and wounded,” he added.

Renzi said he was returning immediately to Rome following the crash. Investigators said it was possible the collision was caused by human error.

One of the four-carriage trains was supposed to have waited at a station for a green light before heading down the single track between the towns of Corato and Andria.