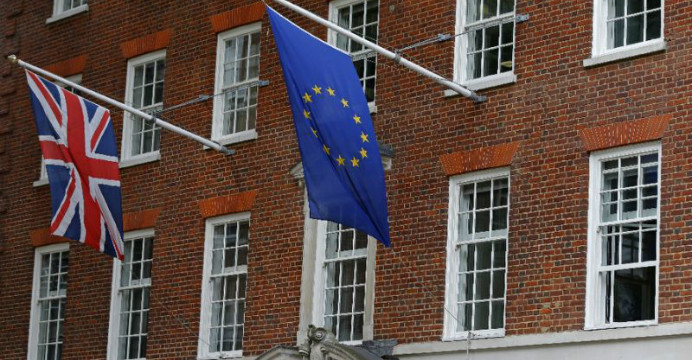 Property funds of UK on Brexit suspended by companies

Three UK commercial property funds suspended trading on Wednesday on a wave of redemptions triggered by the Brexit vote, amid a fierce leadership battle to succeed to Prime Minister David Cameron, reports BSS.

Together the funds manage assets totalling around o15 billion ($19.4 billion, 17.5 billion euros). Clients have been rushing to exit the funds against a backdrop of tumbling share prices for property builders since Britain voted June 23 to exit the European Union, plunging the country into unprecedented political and economic turbulence.

Apartment buildings are backdropped by skyscrapers of banks at Canary Wharf in London, Britain

The turmoil on the commercial property sector comes a day before ruling Conservative Party lawmakers select the two candidates to replace Cameron, who will then be voted on by the party’s 150,000 members. Interior minister Theresa May is the clear favourite.

Despite campaigning for Britain to stay in the EU, she has said she will now push for Brexit but is not planning to invoke the formal Article 50 procedure for doing so “before the end of the year”. Stockbroker Hargreaves Lansdown said more than half the UK property fund sector had now been suspended.

“Clearly there has been a knee-jerk reaction to Brexit in the commercial property sector, which may moderate over time,” said Hargreaves senior analyst Laith Khalaf.

Khalaf added that the companies’ funds were “likely to be closed for weeks and months rather than simply a matter of days”.

In a statement, Henderson said its decision to suspend two funds was owing “to exceptional liquidity pressures… as a result of uncertainty following the EU referendum and the recent suspension of other direct property funds”.

Columbia said the temporary suspensions “allows sufficient time for the orderly sale of assets.” It added that the suspended funds have invested in UK commercial property such as warehouses, shopping centres, high street shops and offices.

But it noted there was “minimal exposure to large central London properties where international demand is focused, particularly offices”.

Occupancy of offices could suffer also should Britain fall into recession, as many experts have warned, or if banks and other businesses look to move staff abroad.

French Prime Minister Manuel Valls earlier on Wednesday unveiled a series of measures to boost the lure of Paris after the Brexit vote raised doubts about London’s future as a European finance hub.

He also confirmed a decrease in a company tax previously announced by President Francois Hollande, which will be lowered from 33 percent to 28 percent.

Britain’s vote to leave the European Union “created shockwaves, for all European citizens but also, in a very concrete manner, many businesses settled in the United Kingdom,” Valls said.

“In this new environment which is taking shape, we want an attractive France,” he said, adding that he wanted to improve the tax and legal framework to “welcome even more companies (and) make Paris the capital of smart finance.”

Britain’s domestic property market has also taken a hit since the result of the referendum, with London’s upmarket estate agency Foxtons warning that profits would be hit this year as a direct result of Brexit.

Singapore’s United Overseas Bank last week said it would halt lending on property purchases in London because of uncertainty caused by the vote outcome.