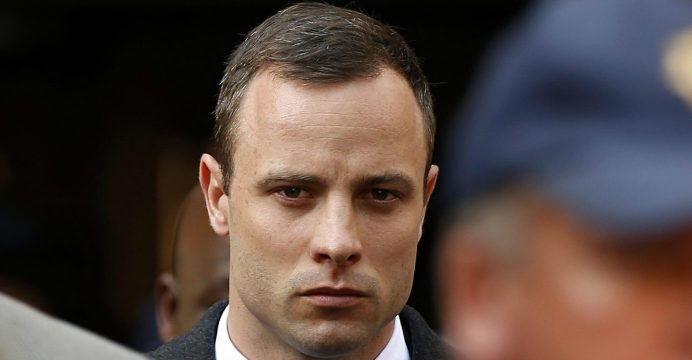 South African Olympic athlete Oscar Pistorius has been sentenced to six years in prison for the murder of his girlfriend Reeva Steenkamp in 2013, reports BBC.

He was initially given a five-year term for manslaughter, but was found guilty of murder on appeal last December. He was taken immediately to jail. Both the prosecution and defence can appeal, but his lawyers say they will not.

Reeva Steenkamp was murdered by Oscar Pistorius in 2013

Pistorius, 29, shot Reeva Steenkamp four times through a locked toilet door in February 2013. He admitted shooting her, but said he had mistaken Ms Steenkamp for an intruder and acted out of fear.

Judge Thokozile Masipa said mitigating circumstances, such as rehabilitation and remorse, outweighed aggravating factors, such as his failure to fire a warning shot, for deviating from the prescribed 15-year sentence.

FROM HERO TO KILLER

According to CNN, Despite a series of hearings, questions remain about exactly what happened at 4 a.m. that morning. Stunned fans have wondered how the celebrated former Olympian and Paralympic gold medalist turned into a killer.

The prosecution has said that Pistorius had a violent streak, and that he murdered his lover after a late-night argument. But the judge said there was no evidence supporting the accusation that the two had a fight.

The defense has always maintained that the amputee track star mistakenly believed Steenkamp was an intruder and feared for his life when he shot through the door.

While the opposing sides offer different versions of what happened, one thing is certain: Pistorius will not be a free man for a long time and it’s not the first time he’s going to prison in Steenkamp’s killing.

After a nearly 50-day trial stretched over seven months, Pistorius was found guilty of culpable homicide (much like manslaughter) in September 2014.

Judge Thokozile Masipa ruled the sprinter had acted negligently when he shot Steenkamp, but that he didn’t do it intentionally, and sentenced him to five years in prison. He served a year of that sentence, and was released to house arrest in October.

But the Supreme Court of Appeals overturned the verdict last December, and found him guilty of murder. The appeals judge said Pistorius should have known that firing his gun would have killed whoever was behind the door, regardless of who he thought it was.

The minimum prison sentence for murder in South Africa is 15 years, and the prosecution had called for no less. But the defense tried to secure a shorter sentence by arguing that his disability and emotional state were mitigating factors.